Despise You (CA)
Creator|Destroyer (TX)
Shaved Women
Overdoser
@ Apop Records / 2831 Cherokee Street
9 pm / $7 / all ages
Despise You brings precise power-violence from the west coast. They've never played in St. Louis, and their live shows carry a reputation, so don't miss out. I wasn't able to track down music from Creator|Destroyer, mostly because there are other bands out there with the same name, but they're traveling with Despise You, so they're likely along the same lines - don't expect a folk band or something. Shaved Women is hot off the release of their new record Just Death and I heard a rumor that this might be Overdoser's last show - plenty of reasons to go.


Woozy (LA)
The Sal Show (IL)
Lions Eat Grass
Cold Rooms (First Show)
@ Foam / 3359 South Jefferson Avenue
8 pm / $5 / all ages
Woozy brings a mash-up of mellow shoegaze and intricate riffing that feels subtle and controlled. Solid songwriting is at work here, bringing just enough bursts of loud, distorted rock to break up happy, melodic hooks. The Sal Show is the side project of Sal from Chicago-based Animal City, but those unfamiliar should expect poppy indie-rock. Leland, the brains behind Cold Rooms, has spent the last few years making killer home recordings under the name Weird White Wolves. This show is his first live performance - definitely not to be missed.


UNDERCURRENT 9 featuring:
Kisser
Willis
Kingston Family Singers
Kenshiro's
@ Schlafly Tap Room / 2100 Locust Street
8 pm / free / all ages
Undercurrent is a monthly show series featuring local punk, experimental and more. Each show is recorded live and put on cassette tape by Wrong Division and Paradoxal Pterodactyl. So if you come to this show, you'll get a free cassette tape with music from the previous Undercurrent. All bands play in the projections of Chad Eivins aka Chizmo.TV. Everything's free, everything's local.


Deaf Wish (AUSTRALIA)
Trauma Harness
@ CBGB / 3163 South Grand Avenue
9 pm / donation$ / 21+
Deaf Wish is post-punk via Australia, and they're playing a cramped dive bar in the Midwest. That should be reason enough to go, unless you hate punk music in general, but considering the band is traveling half-way around the world, it's worth a shot. Deaf Wish's inventive song writing invokes familiar sounds - definitely inspired by post-punk of the '80s - but the band feels wholly original, propelling its songs into a fuzzy, distorted mess. 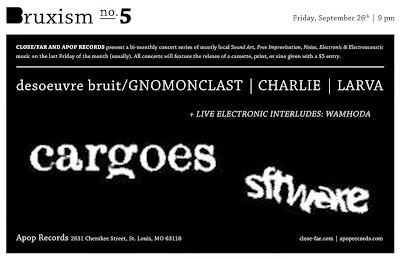 
Marriage (TX)
Britches
Catholic Guilt
Free Willy (members of Willis and Beauty Pageant...first show/last show?)
@ Kismet Creative Center / 3409 Iowa Avenue (right off Cherokee Street)
8 pm / free / $5 suggested donation / all ages
Kismet Creative Center is a new space at the corner of Cherokee and Iowa. If you've been to the new pizza joint Yaqui's, it's right next to that, across the street from BANK projects. This is the first loud show there, and kind of a test run. Marriage features members of Black Eyes (Dischord Records) and When Dinosaurs Ruled the Earth. The five-piece uses dual percussion to drive a bass-heavy dirge of noisy psych-rock. If you're a fan of kraut rock or noise, this band is right up your alley. Britches is coming back after a long-hiatus to play songs from its last album Demolition and Free Willy is a one-time super group with members of Willis and Beauty Pageant. Show up early for a secret band.

Bring cake, it's my birthday. -Joe 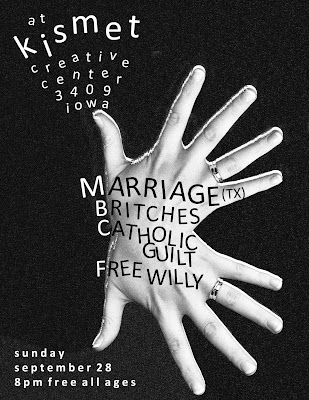