The Fluff of Murder

@ Schlafly Tap Room / 2100 Locust Street
8:30 pm / free / all ages / all attendees receive free tape
Undercurrent is a monthly concert series brought to you by Wrong Division, Schlafly Tap Room, The Paradoxal Pterodactyl Podcast and Chizmo.TV. Each show is recorded and thrown onto cassette, mixtape style. The tape is made available, for free, at each subsequent show. If you attended February's Undercurrent, you received the cassette from January's show. This month's tape features The Funs, Muck-Tet, Dusty Fingers, CaveofswordS, Chris and Tim Rakel. Come out to the free gig, check out the video projections by Chizmo.TV and grab a free tape.


Doom Town (final show)
Nervosas (OH)
Staring Problem (IL)
@ Melt / 2712 Cherokee Street
8 pm / $7 / 18+
This is Doom Town's final show. For the past four-ish years, Doom Town has been the quintessential St. Louis punk band. After debuting with an awesome hybrid tape/zine, the band followed up with more releases, including a 7" and split 12" with Autonomy. Doom Town will be one of those bands that people talk fondly on for the next ten years, give or take. If you're already a fan or just now hearing about them, this show will definitely be one to check out.

Bad History Month is Fat History Month sans drummer. The guitar floats through songs in a really clever way, and lyrics of dark comedy follow along. Stonechat and Willis both bring their own style of resident odd pop while Con Trails brings a kind of shoegaze sound sans the excessive pedals that the genre is known for.

OK, maybe none of the above is punk enough. Go check out American Hate, Shaved Women and more over at The Livery instead.

Guerilla Toss (MA)
Ryan Power (VT)
Kisser
Britches
(Album Release Show)
@ Cafe Ventana / 3919 West Pine Boulevard
8:30 pm / $6 / all ages
Guerilla Toss is swinging by St. Louis on their way back from SXSW. I've heard rumors of blood and full frontal nudity at recent live shows, so that's as good a reason as any to check out the band. Theatrics rarely come bundled with good weird music, but Guerilla Toss ups the ante by providing a wild performance alongside brain-bending prog-rock. Get into this dance band for aliens. Britches returns on this night after a 7 month hiatus, and they'll be bringing a brand new recording with them.


Jack Topht (NY)
Hoonbag Moonswag
Crater Canal
@ CBGB / 3163 South Grand Avenue
9:30 pm / donations / 21+
Jack Topht nabbed the name "awesomerap" on bandcamp. That's reason enough to believe his rap is awesome. Topht rhymes fast over backtracks about obnoxious people, in your face politics and sex sex sex. Hoonbag is a Demonlover / Bug Chaser side projection of sleazy dance tunes and Crater Canal is a tongue-in-cheek performance art piece brought to you by the heads behind Skarekrau Radio. Since the show is at CBGB, no one will overtly bug you for money, so find the tip jar and throw a fiver in.

Jandek
@ The Billiken Club / 20 North Grand Boulevard
8 pm / $15 / all ages
Jandek is an outsider music legend that has released over 70 albums since 1978. At the center of the Jandek mythos is Sterling Smith, who typically performs with a backing band with anonymous members. Jandek seems to be the name given to an amorphous project with different participants for every live show, but Sterling Smith remains involved as the central figure, or as he calls himself, the Coordinator. The video above shows a very abstract performance, but searching out Jandek brings up much experimental folk and blues.

Useless Eaters (CA)
The Brainstems
Ski Mask
Bad Dates
@ Melt / 2712 Cherokee Street
8 pm / $6 / 18+
This show is chock full of hot guitar rock jocks scarfing down leather jackets and crapping good punk tunes. If that's too nonsensical or whatever you can click the links above. Save for Ski Mask, all the bands are snotty rock 'n roll with audible early punk influence. What's the opposite of oi?

Undercurrent 3 is next week. Flyer: 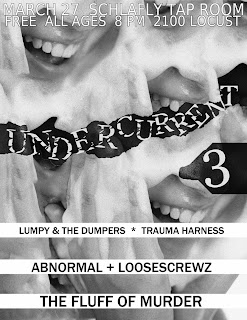 
Kowabunga Kid (IL)
Vanilla Beans
Wild Hex
Dem Scientist
@ Café Ventana / 3919 West Pine Boulevard
8 pm / $5 / all ages
Kowabunga Kid belts static-filled punk pop with a wet underbelly of feedback. Wild Hex and Dem Scientist both spew the kind of noisy rock and roll St. Louis is so good at. The Vanilla Beans is there as a keen pop discourse to the rest of the bands. Skank with confidence.

If neither show above suits your taste, the HEARDING CATS collective just announced an experimental showcase featuring Gino Robair at the William A Kerr Foundation for Saturday night.

Stephen Houldsworth attends more shows in Saint Louis than most, and he covers a huge range of sound. Be it hardcore or noise, pop or rock, Stephen comes equipped with his point-and-shoot. The guerilla style of photography that results is a dry and honest take on the independent scene in St. Louis. Once a month, Mr. Houldsworth shoots us an e-mail with his recent favorite photos. 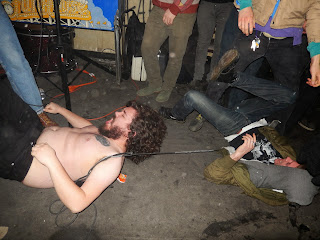 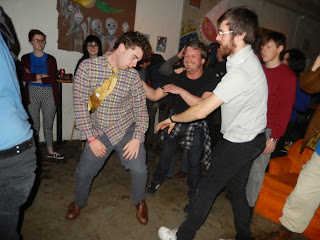 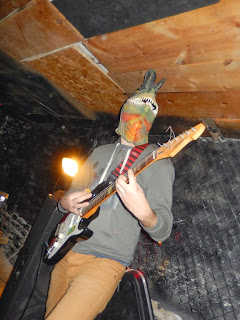 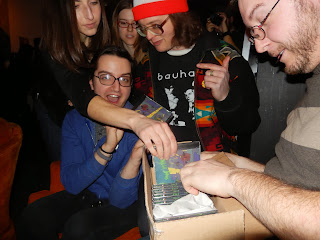 Fresh Vanilla:
While waiting for their set to begin, the Pancake Master surprised the Vanilla Beans with their new EP. (2/28/14) 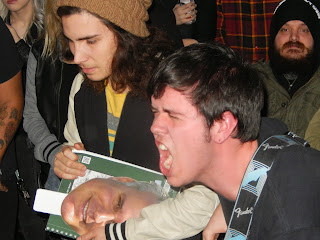 Scream and Shout:
Laika saw the face of Rob Ford and just had to scream and shout at the Livery. (2/8/14)
Email ThisBlogThis!Share to TwitterShare to FacebookShare to Pinterest


PEAT HENRY Benefit Show featuring:
The Conformists
Faultfinder
Shaved Women
Lumpy & The Dumpers
The Funs
Catholic Guilt
Life Like
@ Heavy Anchor / 5226 Gravois
8 pm / $7 / 21+
We could call this show "For Peat's Sake" or "Give Peat A Chance." Click any of the aforementioned names to check out the music, but honestly, there hasn't been a better, more representative line-up of St. Louis music in a long time. This is a great chance to support a local dude while checking out some of the freshest sounds this city has to offer.


King Buzzo (of the Melvins)
@ Fubar / 3801 Locust Street
9 pm / $13-15 / all ages
King Buzzo is the captain of the Melvins, one of the most influential rock and/or metal (depending on who you ask) bands of the 20th century. His solo work is mind-blowing too and definitely worth checking out. Although the songs are based around an acoustic guitar, that Melvins sound is still very much present.


Wei Zhongle (IL)
Eric Hall
Con Trails
John McCowen
@ Cafe Ventana / 3919 West Pine
8 pm / $5 / all ages
Wei Zhongle brings bizarre progressive rock into the freak folk realm ala Sun City Girls and bands of that ilk. If you're unfamiliar, expect throaty singing over odd time signatures with flourishing sections that often delve into chaos. Eric Hall is an appropriate opener, as he chops and screws sounds into a different collage with every show.


Mayday (NY)
Massive Ego (IL)
431
Liquor Lord
@ Bonerville / On Michigan
9 pm / $5 / all ages
Straight gutter-punk from all over the USA. Massive Ego brings a sort of pop-tinge to everything, but the rest of the bands keep it nice and trashy. Just the way every writer from Maximum Rocknroll likes it.

Mark your calendar for next week:

Graham Matthews bounces from show to show with a handy-cam, collecting the odds and ends of music in St. Louis. There is absolutely no genre-bend in his coverage, made evident by an ever growing Youtube channel, which features thousands of videos of independent artists. Once a month, Graham sends us a list of 5 picks from his personal channel.

The Pixies at Peabody Opera House

The Pixies played for over an hour straight. My arm was jelly by this point from holding my camera above heads without any breaks between songs. The crowd was in pure bliss all night. Even the band was smiling. Here we join Joey mid-solo, and what a strange and wonderful solo it is. Vamos!

Dem Scientist at The Livery Company
https://www.youtube.com/watch?v=plPIAmPOMfU
Wallet. Stolen. Dem Scientist rocked so hard, someone decided to take Andy's Slacker's credit and Qdoba gift certificate as thanks. The glamorous life of a rock 'n roll star.

Com Truise at The Firebird
https://www.youtube.com/watch?v=k74cL5517FQ
VHS Sexy times for '80s robot babies. If you don't know Com Truise, he makes songs that sound like pixelated love letters sent straight to your e-heart. If you don't get it, don't worry, most humans don't.

Astral Place at APOP
https://www.youtube.com/watch?v=gMgq8tyzHLU
I heard this was only their second show. Hard to believe with their catchy songs. Hope they don't disappear before we know it. I couldn't find any recordings online, so this might be it. Now you can listen to The Fed Ex Guy song on repeat like I have been doing. It's unforgettable.