Radiator Greys (Josh Levi)
Die Reihe (Jack Callahan)
DJ Max Eisenberg
Brain Transplant
Jade Room / 3131 S Grand Blvd
9 pm / free / 21+
This is a free show featuring three St. Louis ex-pats who've hit greener pastures in recent years. Maybe it's because of family or the enduring stench of St. Louis that brings these guys back? Either way, Jade Room is a cozy space that confines you close enough to make eye contact with these weirdos. The noise is a bonus.


Jack Buck (FINAL SHOW)
Fake Limbs (IL)
Coward (Columbia)
Black Panties
@ Apop Records / 2831 Cherokee St
7:30 pm / free / all ages
Jack Buck sits somewhere between metal, hardcore and early '90s math rock via Shellac and the Jesus Lizard. They could be described as noisy, but the band plays far too tight to introduce any truly loose elements. Jack Buck is a band for fans of rehearsed, dynamic and carefully-crafted songs that never veer too far in any musical direction except "heavy." This is their final show.


Andy Ortmann
What We Won't See
Raglani
Phalange (Joseph Hess Solo/First Show)
@ Schlafly Tap Room / 2100 Locust St
8 pm / free / all ages
Andy Ortmann is a noise legend. From his show on renowned station WFMU to his work in Panicsville, Ortmann consistently brings a fresh take on a challenging genre. What We Won't See is noise rock with a fetish for drum machines and Raglani brings his careful modular mania with a little beauty to an otherwise harsh show.


Perfect Pussy (NY)
Times Beach (Tape Release Show)
The Funs
Self Help (members of Doom Town, Shaved Women)
@ Melt / 2712 Cherokee St
9:30 pm / $6 / 21+
You might have heard of Perfect Pussy from the 6 or so articles Pitchfork has done about them in the past two months. Or maybe you were a fan of the singer's last band, Shoppers. Either way, Perfect Pussy is hot hot hot right now and if you don't jump on this chance to see them, you might be bummed you didn't. Or you might have to catch them at a bigger venue next time around. Times Beach will have their brand new tape on hand, and it's definitely worth the extra 5 bucks you'll need past the door fee.

Lemp Arts Center just announced their beSTLast show of 2013 featuring LzBnz, Cinema Verite, Brazil, and Stonechat. If the two shows above don't scratch your itch, you can always check this out as a more melodic, mellow alternative.


Weak Wick (MN)
Stone Chat
Brain Transplant
Hess/Horn Duo
@ Cafe Ventana / 3919 West Pine Blvd
8 pm / bring donations / all ages
This blog has an over-abundance of the words "punk" and "noise" in it. If there were ever a band that equally embodied those two words, it's Weak Wick. The band's snotty vocals over spaced out guitar tends to be a perfect match with loud, straight-ahead drums. There's something here for fans of both blanket genres, and there's something to be said for a band that somehow makes such weird sounds feel so accessible. Brain Transplant plays for the second time this week, so if you missed the first gig, be sure to catch this show. Same goes for Stone Chat. 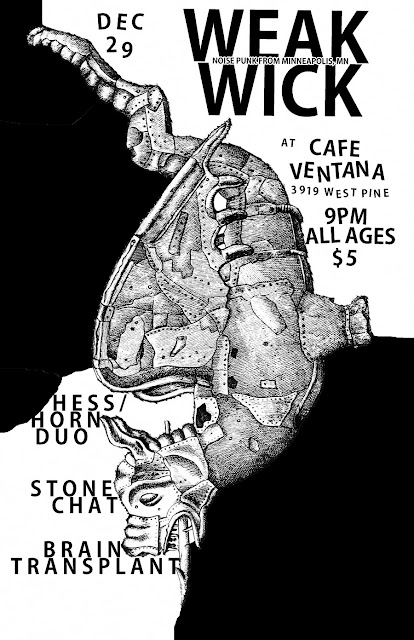 
Serenghetto (MN)
Rats Rest (KC)
Nos Bos
Totally Gay Cop
@ Bonerville / South City
9 pm / $5 / all ages
Serenghetto does dirty punk rock a slight pop element. They have something in common with St. Louis' Doom Town in that they have a split with Carbondale's Autonomy. What does this mean? If you like any of the aforementioned bands, you'll probably like Serenghetto. Totally Gay Cop returns after nearly one year of no shows.

Foam has a much more high-brow affair going on with Itasca, Ivy Meadows, Frances with Wolves and Marble. Consider this a cleaner, more chilled-out alternative to Bonerville's muck-fest down the street. Or hit up both, because people who like ambient electronics can like hardcore too, right?


Skarekrau Radio
Pet Rock: The Musical
Little Big Bangs
Animal Teeth
@ Livery Company / 3211 Cherokee Street
9 pm / $5 / 21+
This is billed as the Stag Night Holiday Shit Show, meaning cheap beer and weird jams. Skarekrau Radio hasn't played since their gig with Cave at Plush back in October, so this is a good chance to see them before they go back into hiding again. Pet Rock: The Musical just returned with its weirdo prog-rock after two years of hiatus. Little Big Bangs and Animal Teeth are Cherokee Street regulars, but this is a good chance to catch both bands if you haven't already.


Gas Rag (IL)
Lumpy and The Dumpers
Liquor Lord
@ Bonerville / South City
9 pm / $5 / all ages
Bonerville is busy this week. Gas Rag features members of Culo and Acid Reflux - expect super quick songs over dark guitar riffs and tons of feedback. Lumpy and The Dumpers are the local hardcore heroes, if not for the super catchy songs then definitely for the slime-porn music video.


Tatsuya Nakatani Gong Orchestra
@ Lemp Neighborhood Arts Center / 3301 Lemp Avenue
8 pm / $8 / all ages
NGO is based around making loosely composed free-improv music using multiple gongs. On this tour, Tatsuya Nakatani will enlist a small group of local percussionists from each city to perform a piece. Check out the video above to get a fairly close example of what you'll be seeing, but keep in mind that no two shows are the exact same.


Attic Ted (TX)
Black James
My Powers (Larva Lu & Zak Marmalefsky)
@ Chromozone / South City
9 pm / $5 / all ages
Attic Ted comes from north Texas to share a special holiday performance of "Mary's Little Secret" an X-Mas opera about the REAL father of Christ. If that isn't enough, Black James will throw down spooky tunes while My Powers weirds you out. This is the Chromozone Christmas Freakout.


Profligate (Noah from Form-A-Log)
Lack
Wax Fruit
The Pen Test
@ Apop Records / 2831 Cherokee St.
9 p.m. / $7 / all ages
Profligate is heady electronic music forced into sharp grids of abrasive, noisy sound. Altogether reckless and danceable, this is musical catnip for weirdos. Wax Fruit always brings the kind of detailed, meandering synth songs that provide greater depth if you look for it, but still ring out in a simple way.

Lumpy and The Dumpers released a new music video for their song "Sex Pit." This was shot recently at Chromozone and features a naked, slime-covered Martin Meyer. There's your warning.

Rob Ruzicka's Band Lotto went down last weekend. Show-goers were sort of prodded and asked to vote for their favorite band of the night. Daren's Jimmy Johns, a sort of all-star group featuring members of Trauma Harness and RUZ, won the "competition" hands-down. I think it was their liberal use of Gogurt, sub-sandwiches and a Weird Al cover that won them the votes.

Phut is a St. Louis based group from the late '90s that featured members from Dazzling Killmen, N. Nomurai and others. Their discography, released a couple years ago through Bandcamp, made the rounds today through social media. Here's another great experimental band that never got enough attention in its heyday:

Graham Matthews bounces from show to show with a handy-cam, collecting the odds and ends of music in St. Louis. There is absolutely no genre-bend in his coverage, made evident by an ever growing Youtube channel, which features thousands of videos of independent artists. Once a month, Graham sends us a list of 5 picks from his personal channel.

Wasoba's mom was sad she couldn't make the show, so she told Ryan, "Hopefully, that nice gay couple will be there to record it." And, we were. Maybe a little more dissonant than his usual gig.

3 of 5 - Magic Dance (David Bowie cover) at Bunk Bed, Fairview Heights, IL
https://www.youtube.com/watch?v=91P0gnd3kS0
Lindsay had a really bad week. She just wanted Andy to play that David Bowie song from Labyrinth. The next thing we knew, we were all under the spell of the magic dance. In the end, he is declared a hero.

Ancient Filth at The Ill Spot, Jamaica Plain, MA
https://www.youtube.com/watch?v=gm5bn2_qSMQ
Welcome to Boston. The Ill Spot was not easy to find, but it was ill and a spot, for sure. Feels so cozy, just like... home.

Parisian at The Firebird
https://www.youtube.com/watch?v=bLMuADYNLKc
Finally got him on tape! Parisian took us on a journey through time and space, and left me saying "hold up, you don't know me like that" to everyone for days. Bonus points for playing in-the-works collabs with Ra Cailum who made it out of the studio for this show!

Cinema Verite at Bunk Bed, Fairview Heights, IL
https://www.youtube.com/watch?v=6y-R8OSGxbQ
This may be the only time I've seen a band attacked with feedback by their own sound guy. Hope that didn't hurt too bad, Jed. I probably shouldn't reward bad behavior by choosing this video... Bad, Sean, bad! Very bad, Sean!