CJ Boyd
Rooster Doctor (of The Barely Free Partial Prisoners)
@ Foam / 3359 S. Jefferson Ave
8 PM / $5 / 21+
Watching CJ Boyd is like reaching into a grab bag of gold mixed with live hedgehogs. Boyd could decide to pepper you with subtle string music or blast you with abrasive noise. Check the video above for some of the former, but be prepared for the latter. The ever engaging Rooster Doctor opens with fresh ambient tunes.


Wax Idols (Oakland, CA)
TV Ghost (Lafayette, IN)
Autonomy (Carbondale, IL)
Trauma Harness
@ The Heavy Anchor / 5226 Gravois
8:00 PM / $7 / 21+
Jangly post-punk fills the bar with wiry sounds coming from Oakland, California. If you're wondering what the heck 'post-punk' means in 2013; Bring 7 bucks and ear plugs. Trauma Harness is fresh off the release of a split 7 inch with Bunnygrunt, so be sure to look out for that if you're into collecting wax.

Keep an eye out for these gigs NEXT week:

Moonrises (IL), Trancers and Kisser at Mushmaus on Tuesday 4/30 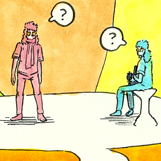 Part 10 of Lazer Guitar, by Curtis Tinsley. Click the thumbnail to view this week's comic. Check back every Monday around noon to continue Tinsley's saga of ethereal jams, the ghosts of rock gods and all around brain-fuckery.
Curtis tinsley lives in Saint Louis and only works on weekends. He spends the rest of his time drawing Cahokia Truth and producing art for bands (Yowie, Spelling Bee, Canyons and many others). Tinsley is a regular contributor to ELEVEN magazine and maintains a slick site for his work at CurtisTinsley.com.

This weekend is bananas. If you haven't planned out your show-going itinerary yet, here's a handy guide to Record Store Day and other happenings in St. Louis. We highly recommend checking out Apop's Record Store Day After Party this Saturday, Apr. 20 at Foam. Joe did a nice write-up about Chikamorachi on the RFT Music blog. Read on for an additional Q&A with percussionist Chris Corsano.

When did you begin performing as a percussionist?
Chris Corsano: I started playing drums when I was 14. When I was about 19 I heard some freely improvised music live for the first time and it immediately swept me away. I began playing that way immediately with whoever I could find who felt the same way, but I wasn't really that fussed about doing it live in front of an audience. It felt like something very personal that I was doing for my own sake. Gradually over the next few years, I did more and more shows and by 2003, I was touring a little. Now I travel a whole lot throughout the year improvising with different people as I go along. I've come to really enjoy and feed off the energy of live shows, hoping that I can pass along a little bit of that enthusiasm for improvised music to people who come to the gigs.

What similarities do you feel between playing composed pieces and free improvisation?
Well, you're still dealing with all of those musical elements of structure, pitch, tempo, harmony, etc., the difference being that with free improvisation you're making these decisions as you go along, hopefully better able to adjust from moment-to-moment to what's happening around you.

Who, if anyone, was a major influence on your approach to playing when you first began?
Lots of people. All the people I listened to on record - Albert Ayler, Milford Graves, DNA, Captain Beefheart, Patty Waters, Ornette Coleman...the list could be endless. Mostly, though, the people who I played like Paul Flaherty with really influenced my sound because I was relating to/communicating with them directly, not through a set of musical references. Put it this way, I played with Daniel Carter one afternoon and quit a job I was working the very next day to spend more time pursuing freely improvised music. It's hard to cite a bigger influence than that.

When listening to others, which qualities captivate you, musically?
It's hard to put a name on it without painting a more limited picture of what it is. Some kind of gravity that draws you into their orbit, maybe? I definitely want to hear somebody with a personal sound that's all their own.

The approach to flowing free-jazz requires a unique set of considerations. What recurring thoughts, if any, do you have while performing?
The main thought (if you even want to put it on such a conscious level...you could also call it an impulse because much of it is done in more of an instinctual manner rather than an academic one) is to be simultaneously taking in what your bandmates are playing and giving back. It's a rapid-fire information exchange where you need to be listening and processing and feeling so you're not just spitting out meaningless data. There's enough of that in the world already.
How does playing with an artist like Darin Gray differ from solo efforts?
First and foremost, playing with somebody like Darin is about the collaboration and becoming collectively greater than the sum of your parts. Playing solo is also trying to play at a level somehow beyond yourself, but you then have to look for other sources of inspiration to do so (maybe the energy of the crowd, the acoustic properties of a room providing new ways of dealing with familiar musical territory, etc..)

Live performance and recorded music offer different challenges. What qualities do you search for in your own captured sound?
Ideally, I hope the recording captures the sound like the way I heard it when playing it. And not just in a technical sense, but I want the record to pass along as much of the emotional information I was putting out there when playing.

Saint Louis has a deep history with experimental music, so I'd like your perspective on Saint Louis compared to larger cities such as Chicago and New York.
Well, last year was the first and only time I'd been to St. Louis, but it was great and I'm very happy to be coming back. I got to meet Charles Bobo Shaw, the drummer from the Black Artists Group and Human Arts Ensemble. What a legend and a great guy! If he, Darin and Jeremy Kannapell are any indication, then it's a town full of incredible, kind and generous musicians.


Record Store Day After Party Sponsored by APOP Records
Chikamorachi (Chris Corsano & Darin Gray)
Ghost Ice
@ Foam / 3359 S. Jefferson Ave.
8 PM / $10 (worth every penny) / all ages
Free improvisations from weathered noise vets fills the keen coffeehouse Foam. After an all day squall of the hard and heavy, relax with the experimental jazz duo whose members have worked with Sonic Youth and The Dazzling Killmen among many others. Ghost Ice, our city's best kept secret, makes a rare appearance.


Heavy Anchor 2 Year Anniversary Party
Jack Buck
The Lion's Daughter
Fister
Everything Went Black
@ The Heavy Anchor / 5226 Gravois
8 PM / free / 21+
Heavy Anchor celebrates two years with all kinds of noisy, metallic hardcore. Heavy Anchor has been open to mostly any show, and has provided a home to many touring bands over the past 24 months. The show's free, so swing by and give the staff a high five.

Stonechat (Album Release)
Lions Eat Grass
That Ain't No Blunt
Mids
@ No Coast Skate Shop / 4260 Manchester Ave.
6 PM / free / all ages
Feel good brainy jams cross into St. Louis by way of four duos. Each band brings riffs and melody with their own unique slant on composition. Check out the great songwriting and powerful drumming throughout.

Record Store Day (4/20) is stacked on all fronts this year. We've highlighted the smaller shows above, but read below for details on the larger events. Oh yeah, all these events below are free. 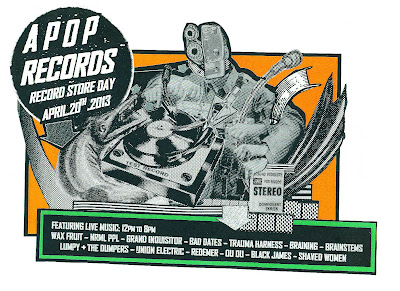 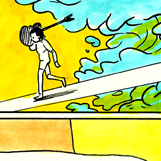 Part 9 of Lazer Guitar, by Curtis Tinsley. Click the thumbnail to view this week's comic. Check back every Monday around noon to continue Tinsley's saga of ethereal jams, the ghosts of rock gods and all around brain-fuckery.
Curtis tinsley lives in Saint Louis and only works on weekends. He spends the rest of his time drawing Cahokia Truth and producing art for bands (Yowie, Spelling Bee, Canyons and many others). Tinsley is a regular contributor to ELEVEN magazine and maintains a slick site for his work at CurtisTinsley.com.
Email ThisBlogThis!Share to TwitterShare to FacebookShare to Pinterest

Night Birds (New Jersey, NJ)
Tenement (WI)
Give (Washington D.C.)
Lumpy & The Dumpers
@ Blank Space / 2847 Cherokee St.
9 PM / $10 / 21+
Blast some skronky surf punk from America's dirtiest city of New Jersey. Tenement's been critically acclaimed almost everywhere, so go see for yourself what these mugs are all about. Lumpy & The Dumpers tears through new material opening for these recent punx of the highest praise.

@ The Firebird / 2706 Olive St.
9 PM / $15 / all ages
Deerhoof tricks one into thinking about pop music, then turns the sound on its head with rough edged jazz. Check out this interview I did with Greg Saunier in late 2011.