Catch HUME (Washington DC) this Thursday at the Crack Fox 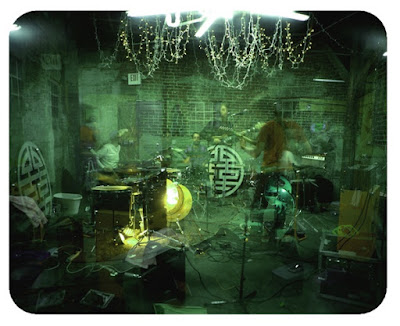 In the Summer of 2011, Hume toured the East Coast with a four-piece line up consisting of guitar, bass and two drummers. Powell himself stood behind the bass and infront of a microphone, keeping the rhythmically complex songs grounded while the guitar player used a compendium of guitar pedals to invoke otherworldly sounds. The dual drummers used an intricate style while keeping every rhythm and part easily distinguishable.

Hume will be performing this Thursday, December 1st at the Crack Fox in downtown St. Louis. If their Summer tour is any indication of what's to come, concert goers are in for a loud dispelling of all things folk and experimental. The Top Grossing Films of 1984 and Flashlights will be joining Hume on this evening, augmenting a solid line up of thoughtful songwriting.

The Top Grossing Films of 1984 is the pet project of Rusty Anderson, whose soft vocals over simplistic melodies invoke nostalgia and whimsy. Flashlights is a new group featuring members of Grape Knee High and Jason LaChance of Person X. Expect an indie explosion reminiscent of the ninties.

Give Thanks to Apop

No plans for Turkey Day? Apop to the rescue!

Camp out the next day - or don't because it's totally unnecessary - for the Apop/Binge & Purge Black Friday sale.
Email ThisBlogThis!Share to TwitterShare to FacebookShare to Pinterest

Volcanoes and their ERUPTION 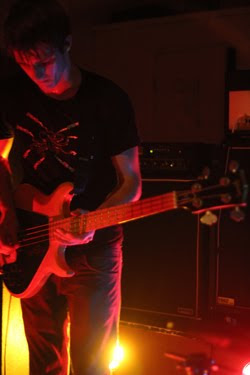 Volcanoes is a two piece from St. Charles, MO, which sports heavy, precise drumbeats that wade through a pool of distorted bass guitar and synthesizer.

Influenced by the likes of Death from Above 1979 and So Many Dynamos, Volcanoes mixes their brand of indie-pop with distorted noise rock for a unique, but powerful sound. Despite being less than one year old, Volcanoes has played packed venues, self-recorded two albums and signed to well-known and respected indie rock label Afternoon Records.

We spoke with Jon Ryan about the band's sound and their experience with getting signed at such a young age.

Your sound is self-described as HUGE, but what was the original idea behind forming Volcanoes?

Jon Ryan
Volcanoes was originally a side project from another band that Eric and I were in, but it quickly became the center of our focus once the other band dissipated.
The original idea was to make music that was as huge as possible, for lack of better words.

From that idea you went on to record "Faults", which is available for free on your bandcamp page. What was the idea behind that recording?

Jon Ryan
Those recordings were our first attempts at forming a sound we then described as "dub core", a mixture of dubstep and rock. We quickly found that we wanted to go in a different direction, so it also contains some of the newer ideas that are more fully realized in the new album.

I understand that you recorded Faults entirely on your own. The same approach was taken with Heavy Hands. What was different this time around?


Jon Ryan
We upgraded from a dorm room to a more controlled environment in Eric's basement. We also had much better equipment, recording programs, and knowledge of recording in general. Throughout the whole process we were more intentional in our approach of achieving a more focused sound.

That's great. When you finished the recording, how did you decide to release it?

Jon Ryan
We basically followed the same approach as we did with the EP, but with the goal of a more professional product. We went through an online duplication company instead of hand making the packaging, and spent a long time finding a good place to hold a release show. We did a midnight online release a couple weeks before the show and made sure to hype it up as much as we could.
This time we created a list of blogs and online contacts to distribute the album to, which we did not do with the EP.

There is news for Volcanoes. Big news. Here's your soapbox. Spit it!

Jon Ryan
We just signed a contract with an awesome label based in Minneapolis called Afternoon Records! The people there are really focused on treating musicians as people and not just opportunities to make money, and we're both super pumped to work with them.
In the coming months they'll be releasing a remastered version of our album, as well as licensing and distributing it in places it would be impossible for us to do ourselves.

How did you come in contact with Afternoon Records? This is a dream-like scenario for many bands. What transpired?

Jon Ryan
It started with me sending a free download code of our album to this blog called MFR (Minneapolis Fucking Rocks), which I've been a follower of for quite some time, in hopes of them possibly doing a post on it or listening to it at the very least. Ian Anderson, who runs the blog and is also a co-owner of Afternoon Records, responded asking if he could post a track from it, to which I very excitedly agreed. A couple days later he sent us another email describing how much he liked the album and basically offered to release it on his label right then.

That is exciting news. I understand you guys have never toured before. What plans does Volcanoes have for branching out in the near future?

Jon Ryan
We're planning on touring after next semester, hopefully for around two weeks. We've talked about the east coast as a possibility, but also might start out with a stretch in the midwest. Right now we're gathering opinions, knowledge, gear and money in preparation. We're both really looking forward to it actually.

That's great. For the uninitiated, who are Afternoon Records? What makes that label the perfect fit for Volcanoes?

Jon Ryan
Afternoon Records is a label built from the ground up by Ian Anderson, who is himself in a band and knows the value of using the resources of a record label to promote music he really believes in. As a fairly young band, Volcanoes can benefit in huge ways by being a part of a label that not only has the ability to get us where we want to go, but also legitimately likes our music a lot.

Wonderful, when can we expect the Afternoon Records rerelease of your album?

Jon Ryan
Not exactly sure on that. Whenever it's done being remastered and the guys at the label have gotten all of their legal jibber-jabber out of the way I guess.
Probably within the next month or two.

How does this contract affect future plans? In what ways will Volcanoes be collaborating with Afternoon Records?

Jon Ryan
Now that we're a signed band, the commitments that both of us have made to the band are a lot more real than before. I had never planned on being a professional musician, but now the prospect of being a legitimate member of the music industry after I graduate college is a very possible thing. Eric and I still both plan on pursuing careers in our majors, but the time and energy we devote to this band will still have to be enough for us to write, play, record, and tour for at least another year or two. We really have no idea where it will take us, but we're both planning on sticking with it for some time. 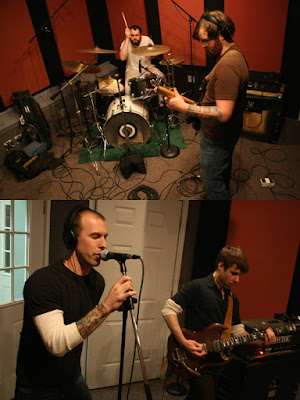 This Friday night, November 18th, will mark the 15 year anniversary of St. Louis' longest running experimental band The Conformists. In celebration, The Schlafly Tap Room (2100 Locust St. in Saint Louis, MO) will be hosting a special performance featuring The Conformists, Airport Elementary School and Spelling Bee. This 15 Year Anniversary performance will mark The Conformists' final concert with singer Mike Benker in St. Louis. He had this to say in an interview with Josh Levi of The Riverfront Times.

"I am not a good singer but I made it work. I can perform and I will do it with gusto two more times. Be there or miss the boat forever.

The Conformists have always done whatever we wanted."

Throughout the interview, Mike Benker talks about the early years of the band, choice performances, experiences and lets loose advice for working musicians. As the front-man of The Conformists, a band signed to Sickroom Records in America and African Tape in Europe, he imparts vital knowledge to tough questions by interviewer Josh Levi. You can read the entire interview HERE.

The article refers to not only the performance on November 18th (at The Schlafly Tap Room), but a concert in Chicago on November 19th as well. The details for that event (which will also be singer Mike Benker's last stand with the band ever) are as follows:
Saturday, November 19th at Quenchers Saloon
2401 N Western Ave, Chicago, IL 60647
The Conformists
Spelling Bee (St. Louis)
The Columbines (Chicago)

For those unfamiliar with The Conformists, tune into KDHX.org tonight from 1 AM to 3 AM (Central Time). If you are in or around St. Louis city (or county), you can tune into 88.1 FM. Our radio show Wrong Division will be highlighting the Conformists, replaying a special in-studio performance from 2010, playing rare tracks, choice songs from their albums and spinning their debut 7" in its entirely.

If this article reaches you late, or you are unable to tune in, we strongly recommend checking out The Conformists' bandcamp page located HERE.

Here is a selection of videos from the band from Youtube:


Jesus was a Shitty Carpenter


Black People
Email ThisBlogThis!Share to TwitterShare to FacebookShare to Pinterest 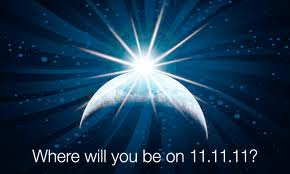 If you missed us discussing some interesting facts about 11-11-11 on the radio show during the wee hours of the morning (which you probably did. You were probably asleep and we don't blame you. We would be too!), check them out here. For kicks! And shits! And grins! You know! For the kids!

For even more FREE music tonight, don't forget Britches, What We Won't See and TOK @ the Schlafly Tap Room tonight at 9 p.m.
Email ThisBlogThis!Share to TwitterShare to FacebookShare to Pinterest

On Sunday November 6th, Pig Slop Studios will be the gathering ground for an early evening album release show. St. Louis' own noise-post-rock trio Britches will be slinging their freshly pressed 4 track album entitled "Demonstration" into a crowd of hungry listeners. The album ranges from short and concise noise rock songs to avant-garde vocal pieces. You can actually listen to a stream of the album HERE. The audio files are available for purchase at the aforementioned link if you're not located in St. Louis, but are still interested in owning the album.

The release show begins at 5 PM and will include performances by The Night Grinder, The Lonely Procession, Spelling Bee and of course Britches. The admission fee will cost you $5, and a free copy of the latest album on CD is included in the price. It's rare to see such a stacked bill on a late Sunday afternoon, but the strange day and time is oddly fitting for a band so esoteric and unsettling as Britches. Pig Slop Studios is located at 2700 Cherokee St. St. Louis, MO 63118 - all ages | BYO_
Email ThisBlogThis!Share to TwitterShare to FacebookShare to Pinterest
Newer Posts Older Posts Home
Subscribe to: Posts (Atom)